View all posts by merlinx9 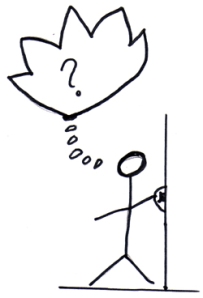 My Buddha, The Cockroach

I was away from home for the first time in 12 years.First trip anywhere without the family. First trip with a girlfriend.First trip that turned out to be a 3 month backpacking adventure in Thailand. First 14 hours of a 72 hour determination, no sleep allowed, full on meditation, in a 10 by 25 foot room.First time attacked by a cockroach

How is it that you can go over 2 weeks without seeing a single solitary roach (which during the trip was a common occurrence) and then get attacked by one?Are roaches not worthy enough to be on temple grounds and this was a renegade roach?How did I find myself in this predicament?

Up to the point prior to that trip I was a typical quarter century westerner from Canada.Ignorant. Structured. Uptight. In dependency-issue denial.Well that all fell apart, right about the time I asked the question as we entered the temple gates, “What are we going to do all day, nothing?”

I hate cockroaches.Pretty harsh indictment.Don’t even know why I hate them so much until I started writing this.It’s a ‘hate’ program downloaded into my brain by society.The attack may literally have been its way of trying to get my attention to wake up. Maybe it was seeking revenge for all the roaches I had killed before.I think he wanted equality with all the other insects that I would make efforts not to kill. I’ve sincerely avoided stepping on ants or caterpillars yet this roach has none of my respect.

White can seem hopeless, undefined with no boundaries, forever expanding.That’s one of the reasons why it’s used to make small spaces look larger and brighter. At the point I heard the skitter of the roach on the floor making a bee line for my head, I knew this small space was about to get amplified.

One of the cool aspects of the temple keepers was that although they practiced Buddhism, they didn’t preach it or try to convert you. They instructed you in the ways of meditative technique for you to come to your own understanding of things.If you had a general interest in their devotion, they gladly imparted their experience upon you.Well folks, I was at a crossroads staring this indignant roach down.I kid you not, he, ‘it’, she, was sizing me up as I quickly tried making sense of my circumstances. You have permission to laugh because if there were any witnesses to what occurred that night, damn, this one’s got to be on their top ten list of hysterical moments.A 5’8, 150 pound athlete about to get into a scrap with a 4 inch featherweight beetle.Will it be a death duel? Had any of my inner exploration led me to a greater connection to my universe, roaches included?

Allow me to digress some more before I wrap this up.The roach made no attempts to leave. It didn’t run away from me. It did not fear me at all.For at least the first couple of minutes, I think it felt the inner turmoil raging inside me, and then the chase began.After what seemed an eternity, I finally captured him.However, his capture quickly turned into a bigger dilemma.I had trapped him about three feet up on a wall under a bowl.Brilliant.I could hear it doing laps around the bowl’s circumference looking for an escape route. Or perhaps it knew that once I lifted the bowl a fraction of an inch, round two would begin.I must have stood there for ten minutes trying to figure out how the hell I was going to extricate this thing from my quarters and return to serene bliss.The killer instinct in me was seething; “Crush it!” was the cry for resolution. After my heart stopped pounding and my head started to clear, the lifesaving solution presented itself in the form of a piece of paper.I created a lid on the bowl by sliding it (which had some Buddhist words of wisdom on it) under the bowl.Luckily for me, this roach’s makeshift transport vessel worked out perfectly.I chucked it out the door and into the night. At some point in all this I had decided not to kill this roach. Won’t even question why. Maybe the potential guilt would leave a bad taste in my mouth after what had been a mind-blowing experience.

There seems to be so much time and energy devoted to attaining enlightenment or a preconceived notion of it created by many authors.I sometimes think religions were created just to confuse us more.Think about how much simpler our lives would be if we didn’t have to unravel or disassociate ourselves from so much dogmatic crap.Or better yet, enlist the presence of our most vile dislike to open our eyes and clear out some old archaic notions. My Buddha, the cockroach, ten years later.